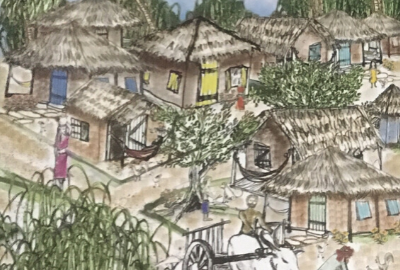 In this interesting and sometimes engaging work, successive events in the
life of ‘Nandi’ an imaginary village in Central Trinidad are carefully arranged
to chart in Three Parts the evolution of rural communities of free Indians in
Trinidad from the 1930’s to the 1960’s.
We are taught about weddings, religious gatherings, the pay yard bazaars,
work on the land, well-kept and functional tapia huts (charming to us
today), the ubiquitous bull carts, the activities of pundits and sadhus, and
the orderings of the panchayat (sometimes given legal authority to handle
complicated issues) all of which impose the conventional narrative of
suffering, cultural resilience, endurance, initiative, responsiveness and
inspiring emergence.
At the same time, this useful collection records the abuse of women and
other cruelties with clear signs of female resistance, sexual scandals (see
‘Whispers from the Cane field’), village feuds and quarrels, a history of
violence , the existence of crime and a tradition of village badjohnism as in
‘The Shaitan’s Reign of Terror’. Not quite in the spirit of Sonny Ladoo but
visible enough if we choose to modify the conventional narrative of Indian
arrival with some of its other truths.
The stories bring in Timothy Roodal, Sarran Teelucksingh, Bhadase Sagan
Maraj, Ranjit Kumar and other well-known personalities, leaders, and
entrepreneurs, who are all shapers of Indian Trinidad. Here, too, we see
the exciting arrival of the cinema and Indian pictures, and the thrill and the
humiliations of country Indians making forays into the big city of Port of
Spain.
The future is clearly indicated in the placement of the successful Indian
campaign to bring about the reversal of the Legislative Council’s decision in

1946 to restrict the right to vote to only those citizens who were literate in
English. Fittingly, the collection marks the Indian Centenary Celebrations
that drew thousands in 1945 to commemorate one hundred years of the
Indian contribution to Trinidad and Tobago. The collection’s capacity to
entertain and instruct can be seen at its best in the accomplished ‘A Bull
Stalks Nandi Village’.
Dr. Gooptar’s experimental choka of fact and fiction goes down well.